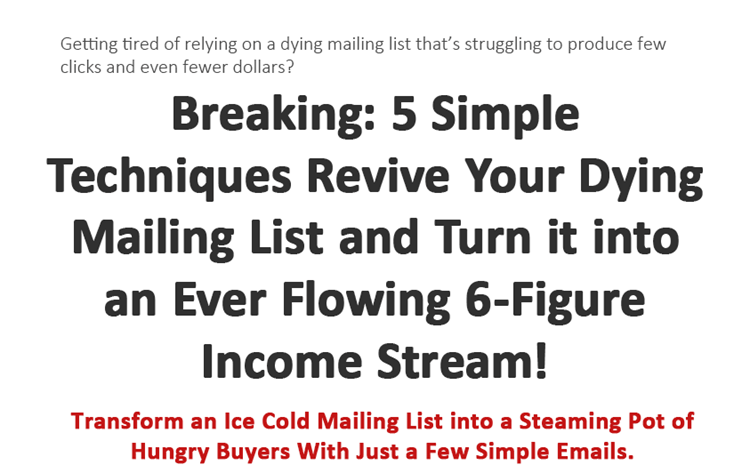 After Investing Hard Earned Cash into Collecting Opt-lns, My List Went Stale and Took Their Money With Them…

I made a big mistake.

See… I discovered an extremely easy way to entice people into giving me their email. Simply offer a free giveaway. It seemed to have worked fabulously, because my mailing list exploded with subscribers.

There was just one problem.

They had shallow pockets. And I’m talking really shallow. Like, “can barely squeeze out a quarter in those pockets” shallow. These guys weren’t willing to part with any of their money. They were attracted to free, and free only. And that wasn’t going to pay the bills.

So here I was. With a list I had invested more time and money into than I care to remember. And I was getting zero payoff.

And this is only one twist that can turn a list sour.

Here’s the 5 Major Profit Killers that Will Suck Your Income Stream Dry:

All too often, hard working folks like you possess a mailing list that could make you a killing. But just one (or even several) of these major issues is holding you back.

After hitting several brick walls myself, and seeing people around me suffer much in the same way, something needed to change.

I reinvested my energy. Using every resource I could get my hands on, I went into hardcore testing mode. Slowly uncovering methods that would transform a lemon into a steady profit stream.

As we speak, you’re sitting on a giant profit opportunity. Your mailing list – no matter how big or how small – can easily be a major income source for you.

All you need is a push in the right direction. The key that will open up the deadbolt on all those wallets. A masterful template, carefully crafted to generate a rushing income stream.